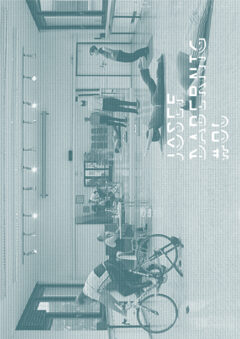 On Discipline Wilfried Lentz
Sjoerd van Tuinen, Josef Dabernig, Wilfried Lentz, et al.Josef Dabernig, Lesley Moore
PublisherWilfried Lentz Rotterdam2011
Formats
Subjects
Keywords
On Discipline is the sixth issue of a series of publications published by Wilfried Lentz. On Discipline was published in March 2011 as an accompaniment to Josef Dabernigs solo show with the same name. The issue consists of a poster as well as a booklet with a text by the philosopher Sjoerd van Tuinen. The text focuses on the subject of discipline and presents an historical overview of notions by philosophers such as Nietzsche, Foucault and Sloterdijk. The installation consists of a disciplinary environment, where three films are shown in a daylight situation, on monitors and screens, as part of a ...

Wilfried Lentz
Wendelien van Oldenborgh, James Beckett, Joachim Koester, et al.Ulrik Heltoft, Josef Dabernig, Rossella Biscotti, Michael Portnoy, Moyra Davey, Lesley Moore
Formats
Subject
Keyword
Publication series with content related to the work of gallery artists and exhibitions. Due to the research-based practice of most of the artists, there is a lot of interesting material that can not be read directly in the work itself but is worth publishing. The articles are written by writers and scholars who are specialists in the artists’ fields of research. The design is by Lesley Moore.