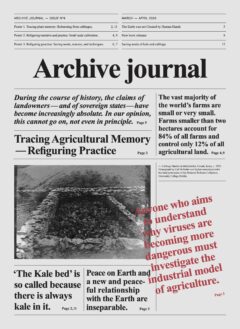 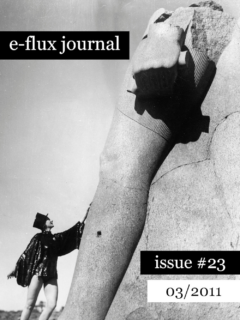 e-flux Journal #23 e-flux journal
Julieta Aranda, Brian Kuan Wood, Anton Vidokle, et al.Julieta Aranda, Brian Kuan Wood, Anton Vidokle, Peter Friedl, Bruno Latour, Mona Mahall, Lívia Páldi, Jon Rich, [4 More...]
Publishere-flux2011
Format
Subjects
Keywords
The Gulf War did not take place, as Baudrillard notoriously put it. But now something else has taken place, and it did not happen in the doldrums of virtuality, but in the streets and squares of Tunis, Cairo, Benghazi, and elsewhere. It seems that the prospect of an all-encompassing condition of techno-saturated anorexia, perhaps appropriate for a time when communications networks and the tools for producing reality were situated in the hands of governments and telecommunications tycoons, has been inverted. No one could have foreseen the perseverance of reality over mass-deception, the weaponization of communications networks in the hands of ...

Notes on Georg Simmel’s Lessons, 1906/07, and on a “Sociology of Art,” c. 1909 dOCUMENTA (13): 100 Notes, 100 Thoughts
György Lukács, Lívia Páldi, Carolyn Christov-Bakargiev, et al.Chus Martínez, Bettina Funcke, Katrin Sauerländer, Cordelia Marten, Claire Barliant, Stefanie Drobnik, Sam Frank, Astrid Wege, [1 More...]
PublisherHatje Cantz2012
Format
Subjects
Keyword
The black notebook marked “LAK 529” contains two periods of note-taking by György Lukács, written two years apart, which constitute part of the bequest that was recovered from the so-called Heidelberg suitcase. In 1973, with the help of a current biography, an employee of the Deutsche Bank in Heidelberg identified the owner of the material as Lukács, who had deposited them in 1917, prior to his return from Germany to Budapest. In addition to 1,600 letters and text fragments, this material also contained Das Gericht, which was presumably written in 1913 and dedicated to his first wife, Ljena Grabenko, as ...