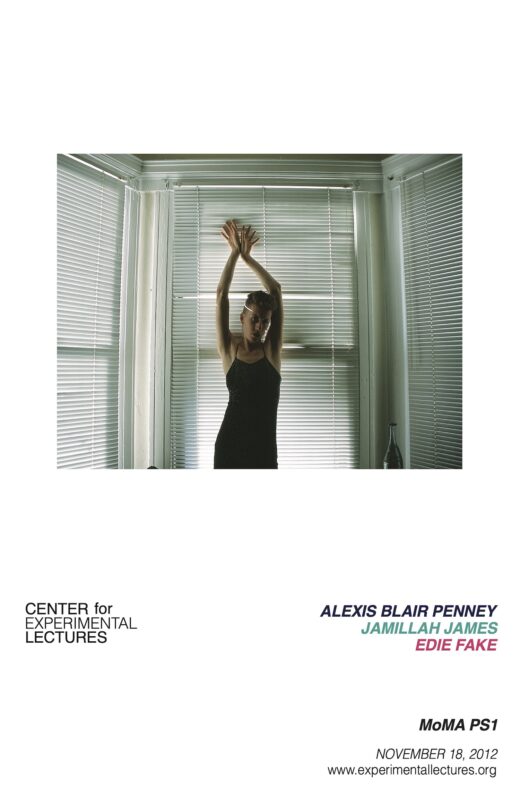 Artist Edie Fake’s lecture The Sexual Life of Patterns explores the concept of “the weave” in relation to textiles, gender, and the trans body. Extending the logic of intuitive herbalism, magic, and tarot into textile decoration, ornamentation, and repetitive pattern, Fake’s lecture will explore the physical meaning of patterns that are integral (woven in) and imposed (printed on). Fake proposes patterning as about the interaction of bodies—tessellating patterns as trans, stripes as individuals, paisley, plaid, checks, and so on. Fake provides an idiosyncratic and illuminating read of the intersections between gender, sexuality, textile, and patterning.

Drag performer, artist, and writer Alexis Blair Penney’s lecture, Window, will incorporate elements of a traditional lecture with publicly enacted ritual and drag-performance. Structured around the five points of a star, Penney invites the audience through a portico into the performer’s mind by conjuring and embodying five diva archetypes: Madonna as she presented herself in Truth or Dare and Ray of Light; the character of Karrakaz from the famous science fiction book The Birthgrave by Tanith Lee; poet and folk icon Joni Mitchell; Barbara Streisand’s depiction of Esther Hoffman in the 1976 rock musical film A Star Is Born; and the anti-diva—patriarchy—as manifested in the musical Jesus Christ Superstar. Penney connects the points of the star with the thread of reflections about his own mother, and locates the audience as the anchor that enables the diva-performer to be possible at all.

Curator Jamillah James’ lecture, Comic Relief: On Art and Television, explores the ways that the art world and artists are depicted in popular culture, particularly in television series and the occasional film. James is interested in the comedy that ensues as a result of those representations, as well as what we can gather from them by way of understanding the way our culture perceives art and artists. James mines the unsettling moment when her televisual therapeutic escape from art world labor is interrupted by programming that forces a reconciliation of her professional reality with popular culture’s representation of this reality, the latter of which becoming an unintentional, but no less potent, form of reflection and institutional critique.