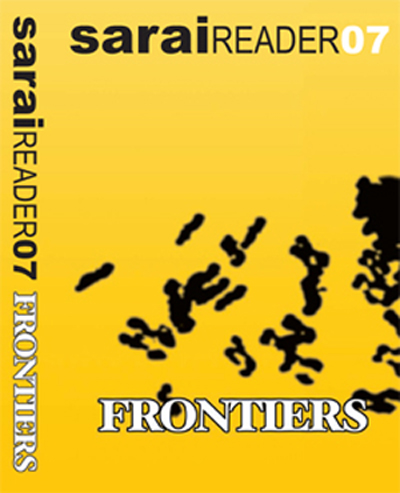 Frontiers considers limits, edges, borders and margins of all kinds as the sites for declarations, occasions for conversation, arguments, debates, recounting and reflection. Our book suggests that you consider the frontier as the skin of our time and our world, and we invite you to get under the skin of contemporary experience in order to generate a series of crucial (and frequently unsettling) narrative and analytical possibilities.

For us, the frontier is a threshold waiting to be crossed, a space rife with the seductive aura of transgression. We are not talking only of actual, physical borders (though of course we are interested in literal and political borders) that are usually the residues of war, but also of the borders between different temporal registers, between languages, between different modes of action, between different bodies of thought and conviction, between the exception and the rule. Looked at this way, a border is more than a constellation of fixed markers circumscribing a domain.

We have always viewed the Sarai Reader as hospitable to new and unprecedented ideas, as a space of refuge where wayward reflections can meet half-forgotten agendas. We hope our text this year sets the stage for a productive encounter with the demand for an account of the boundaries, parameters and verges of our times.