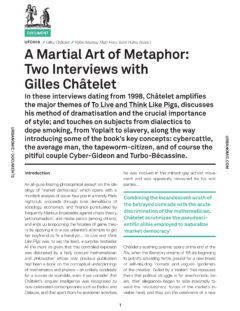 A Martial Art of Metaphor: Two Interviews with Gilles Châtelet Urbanomic Documents
Gilles Châtelet, Robin Mackay, Matt Hare, et al.Saint Huître
PublisherUrbanomic1998
Formats
Subjects
Keywords
In these interviews dating from 1998, Châtelet amplifies the major themes of To Live and Think Like Pigs, discusses his method of dramatisation and the crucial importance of style; and touches on subjects from dialectics to dope smoking, from Yoplait to slavery, along the way introducing some of the book’s key concepts: cybercattle, the average man, the tapeworm-citizen, and of course the pitiful couple Cyber-Gideon and Turbo-Bécassine.

The Animatic Apparatus Zer0 Books
Deborah Levitt, Gabriella Nicole Padilla, Stuart Davies
PublisherZer0 Books2017
Format
Subjects
Keywords
Unprecedented kinds of experience, and new modes of life, are now produced by simulations, from the CGI of Hollywood blockbusters to animal cloning to increasingly sophisticated military training software, while animation has become an increasingly powerful pop-cultural form. Today, the extraordinary new practices and radical objects of simulation and animation are transforming our neoliberal-biopolitical “culture of life”. The Animatic Apparatus offers a genealogy for the animatic regime and imagines its alternative futures, countering the conservative-neoliberal notion of life’s sacred inviolability with a new concept and ethics of animatic life.

Arakawa + Madeline Gins The Funambulist Pamphlets
Léopold Lambert, The Reversible Destiny Foundation, Arakawa, et al.Madeline Gins, Léopold Lambert, Shingo Tsuji, Stanley Shostak, Russell Hughes, Jean-François Lyotard
Publisherspunctum booksThe Funambulist2014
Formats
Subjects
Keywords
Volume 8 is dedicated to The Reversible Destiny Foundation created by Arakawa and Madeline Gins. The Foundation is much more than an architectural practice. It articulates art, philosophy, poetry, architecture and, to some extent, science in a dialogue that benefits each of these disciplines and ultimately serves one of the most radical ideas that apply to architecture: the action of non-dying. Guest authors include Shingo Tsuji, Stanley Shostak, Russell Hughes, and Jean-François Lyotard. Volume 08_Arakawa + Madeline Gins includes: Introduction: Towards an Architecture of Joy — Architectures of Joy: A Spinozist Reading of Parent/Virilio and Arakawa/Gins’s Architecture — Applied Spinozism: Architectures ...

Architecture and Eugenics: Modernist Design as an Orthopedic Apparatus The Funambulist Podcast
Léopold Lambert, Fabiola López-Durán
PublisherThe Funambulist2015
Formats
Subjects
Keywords
This conversation with Fabiola López-Durán is primarily structured around her work exploring Le Corbusier’s eugenic ideology from 1925 Paris to 1941 Vichy. At a moment when many events and debates are organized around his paradigmatic work, the main critiques seem to focus on his personal political engagement and ideology without fully engaging with the work and its consequences. What Fabiola proposes in her work is to take his claims for the orthopedic power of architecture seriously, and look at the vision of society it is therefore promoting. Although Le Corbusier’s example might be canonical, her argument is that the entire ...

Architectures of Quarantine and Containment The Funambulist Podcast
Léopold Lambert, David Garcia
PublisherThe Funambulist2013
Formats
Subjects
Keywords
Each architecture that was thought as a physical implementation of private property contains already in itself the potential for containment in a legal situation like the one of quarantine. David Garcia talks about the origins of such a situation, its territorialization (lazaretto, Ellis Island etc.) as well as its application on bodies, but also on entire landscapes like in Chernobyl and Fukushima. We discuss about Michel Foucault’s definition of biopolitics through the historical example of the quarantined city that suffers from the plague, as well as David’s own architectural projects in response to the various problems tackle by quarantine. David Garcia ... 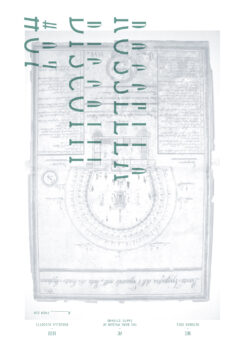 The Black Panthers’ Struggle Against the US Politics of Health The Funambulist Podcast
Léopold Lambert, Alondra Nelson
PublisherThe Funambulist2014
Formats
Subjects
Keywords
This conversation with Alondra Nelson focuses on the socio-historical descriptions of her book Body and Soul (University of Minnesota, 2011) that unfolds the work of the Black Panthers (late 1960s – 1970s) to resist against the highly discriminatory mechanisms of the politics of health in the United States. Following the structure of the book, we discuss the discrimination against the African American community, both in its negligence (inappropriate healthcare response to disease, prohibitive cost of care) and in its active medicalization of marginalized bodies (scientific research on convicts and women, experimental brain surgery). Against this systemic oppression, the Black Panther Party created its ... 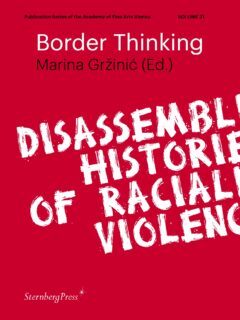 Border Thinking: Disassembling Histories of Racialized Violence Publication Series of the Academy of Fine Arts Vienna
Eva Blimlinger, Andrea B. Braidt, Karin Riegler, et al.Marina Gržinić, Göksun Yazıcı, Rubia Salgado, Gergana Mineva, das Kollektiv Women, Marina Gržinić, Stanimir Panayotov, Khaled Ramadan, [26 More...]
PublishersSternberg PressAcademy of Fine Arts Vienna2018
Formats
Subjects
Keywords
Border Thinking: Disassembling Histories of Racialized Violence aims to question and provide answers to current border issues in Europe. Central to this investigation is a refugee crisis that is primarily a crisis of global Western capitalism and its components: modernization, nationalism, structural racism, dispossession, and social, political, and economic violence. In this volume, these notions and conditions are connected with the concept of borders, which seems to have disappeared as a function of the global neoliberal economy but is palpably reappearing again and again through deportations, segregations, and war. How can we think about these relations in an open way, ...

Claiming Humanity: A Black Critique of the Concept of Bare Life The Funambulist Podcast
Léopold Lambert, Alexander Weheliye
PublisherThe Funambulist2014
Formats
Subjects
Keywords
This conversation with Alexander Weheliye is built upon the critique he made of the work of Giorgio Agamben, in particular in his essentialization of the muselmann in the context of the Holocaust. Alexander argues that slavery functions as a better paradigm to understand the “layering” of bare lives and the racial aspects that this understanding involves. He explains how he is interested in finding other ways to “claim humanity” than the traditional judicial one that attributes this status in a retroactive manner to suffering bodies. In order to do so, we evoke the works of major African-American and black Caribbean thinkers such as ...

Collecting Migrant Experiences at the Walls of the European Union The Funambulist Podcast
Léopold Lambert, Lucie Bacon
PublisherThe Funambulist2015
Formats
Subjects
Keywords
Lucie Bacon and I had this conversation only a few days after she finished her second field trip in Bosnia-and-Herzegovina where her research took her to study the European Union politics of “externalization,” i.e. the ‘subcontracting’ of its (anti-)migration policies outside of the Shenghen Space. Lucie has visited some asylum centers, where numerous migrants wait to be granted their legal status, and detention centers, where migrant bodies are imprisoned prior to their expulsion. She collected numerous testimonies from migrants themselves, but also organizers, activists, administrative officials, etc. and tell us about them in this discussion. We also talk about her ...

The Colonial Administration of Bodies and Space The Funambulist Podcast
Léopold Lambert, Ann Laura Stoler
PublisherThe Funambulist2014
Formats
Subjects
Keywords
Ann Laura Stoler and I begin this conversation by introducing the political context lexicon that she co-curates and edits. We then discuss the work she had done around the colonial management of sexuality and reproduction. The existence of the métis (mix-blooded) child in the colony renders more complex the binary distinction between colon citizens and colonial subjects. Biology is nevertheless not merely the only site of recognition for the colonial administration, behavior is also extremely important in the access to citizenship. We examine how space, whether corridor or school, is built to accommodate the administrated behavior of the colony. Finally, Ann gives us a preview ...
1 2 3 … 6 Next