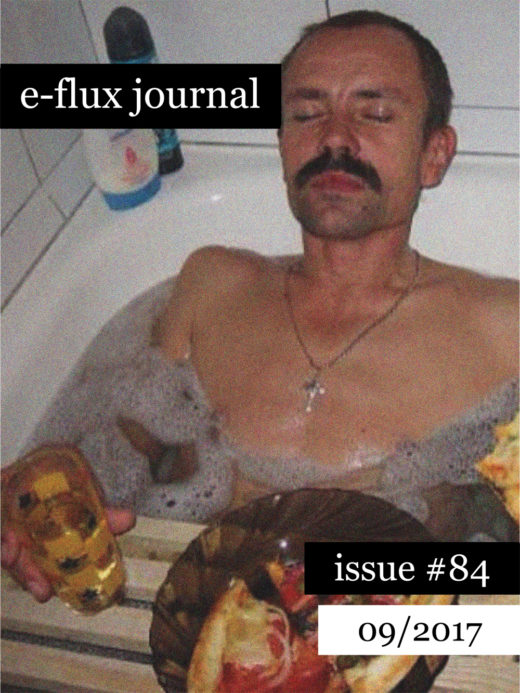 Indentured to the past, we drag our inherited identities through a forest of networks bursting with mysterious intellectual fruit. We’re not sure which concepts are poisonous and which are safe. History is like a mistranslated phrasebook full of old-fashioned illustrations which everyone makes fun of on the internet. Attempts at organization feel fanciful and absurd: eclectic inventories of apocalypse-kitsch. In “A Palace of Unsaids,” Rob Goyanes considers the work of mourning under twenty-first century conditions. Does it matter if we show up to the wrong shift at the memorial-factory as long as we do our time?

Those that insist on mourning only their own ancestors are practicing what Boris Groys calls “vertical solidarity,” which sees the world as fundamentally organized by competition not between classes, but between expanded territorial kin-structures. Nothing is more vertical than patriarchy, in this respect, insofar as it is patriarchal anxiety which stand guards over whatever inheritance which is ‘passed down,’ from generation to generation. As a result, Houria Bouteldja demonstrates, indigenous women frequently find themselves trapped between colonial and peripheral patriarchies. This competition makes any “horizontal solidarity” between women difficult, because it passes over the entrenched persistence of colonial patriarchy to celebrate isolated instances of its refusal at the periphery.

Perhaps a more promising basis for horizontal solidarity might be the de-territorialized, planetary relationship to petroleum that Oxana Timofeeva theorizes in “Ultra-Black: Towards a Materialist Theory of Oil.” A layer of energy sedimented beneath our feet from the lives of creatures past gives a concrete reality to the idea that capital represents an accumulation of dead labor. The potential at work in this common relationship to oil is why the United States so aggressively mobilized the national-chauvinist brand of vertical solidarity before each of its military excursions in Iraq, as Rijin Sahakian shows in “What We Are Fighting For.” Here, too, shifts in media technology—from broadcast to cable news, from cable news to the internet—have not changed the imperialist emphasis on gender roles in the process of reproduction. From nuclear family-themed Super Bowl halftime shows to lies about killing babies, our screens have only intensified the distribution of misinformation. Francesca Hughes reaches back to the legacy of the Arab-Islamic renaissance to provide a deep epistemology of the screen as stretched, quite literally, between two figures previously responsible for representing the process of knowledge, the tower and the corridor, or passageway. Jacob Stewart-Halevy looks at a more recent century to compare how moving-picture technology has approached questions of work and labor across distinct regimes of accumulation.

Is the image or the word more immediately horizontal? Which requires more translation? The verticality of language frequently confronts the moment when translation gives way to what Emily Apter calls “Armed Response.” How do we judge what we hear or read? And how is this process different than what we bring to bear on what we see? Why is nationalism so image-heavy, when it is language that gets all the credit for separating nations? This question takes on unique weight in an international art world that moves between territories and languages on a regular basis. Claire Fontaine collects a chorus of anonymous responses to Documenta, as a way of avoiding re-inscribing the show’s vertical lines. “The chorus’s function is to comment and highlight the key moments of a Greek tragedy, in order to help the public position itself in relation to the events represented.” Hopelessly horizontal, anonymity resists accumulation, lighting a path to the exit.