Flugschriften was the name given to small pamphlets at the beginning of the 16th century, not long after the invention of the printing press allowed such texts to be distributed quickly throughout Germany and the rest of Europe. Literally translated as “Flying Writings,” this term speaks of the speed with which information could now be packaged, distributed, and consumed.

Media scholar Ronald J. Deibert has noted that Flugschriften were “ideal for circulating a subversive message,” since they were light, disposable, and easily hidden in pockets or other places that large tomes could not hope to escape to. Our series intends to connect to this long tradition of “flying writings,” giving heterodox, experimental, challenging writings a pair of wings with which to find like-minded readers.

Flugschriften publishes short, sharp shocks to the system – whether this be the political system, literary system, academic system, or human nervous system. 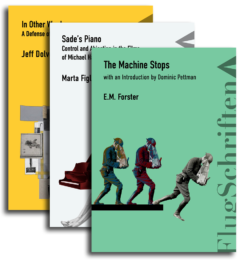