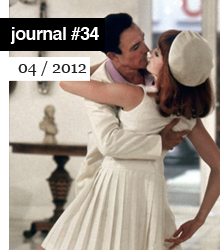 Beyond performative resistance and melancholic complicity with the existing order, a crucial strategy emerged in the 1980s from a collective of artists in Yugoslavia who used complicity as its most lethal weapon. Inke Arns and Slavoj Žižek have respectively described the activities of NSK (Neue Slowenische Kunst) and its sub-groupings (the band Laibach and the artist collective IRWIN, and Scipion Našice Sisters Theatre, among others) variously in terms of over-identification or subversive affirmation, as performing the “hidden reverse” of state ideology. From Laibach’s nationalism in drag to the issuing of a passport for an imagined “NSK state,” NSK is perhaps now best known for having found a way to produce radical ruptures within the logic of totalitarian power without necessarily having to take recourse in critical distance…

Escaping From Exile by Belonging to an Exiled Land
Bilal Khbeiz

The Nigerian Connection: On NSK Passports as Escape and Entry Vehicles
Inke Arns

No Good Time for an Exhibition: Reflections on the Picasso in Palestine Project, Part II
Michael Baers