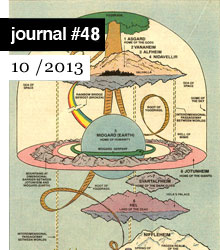 Once there was an idea of a vast human family ready to realize humanistic ideals and internationalist partnerships like the United Nations, and some people called it Globalism. But then the idea got bundled with a way of carrying the sentiment of internationalism over to economics, turning jurisdictional partnerships and trade relations into pretty much the same thing. And its name sounds less like a principle than a process—a making global, a globalization of the earth. And since at least the 1980s it was decided that this is how we would all come together, with the globe as market and the market as globe. But at the same time it is impossible to deny what globalization has confronted us with: our own planet—not as an abstract idea but as a massive geological material fact. Now we live the sensation of tracing our hand over a globe on a tabletop, only the globe is the actual earth itself…

The Making of Americans
Walter Benjamin

A Reply to Nato Thompson’s “The Insurgents, Part I”
Rijin Sahakian