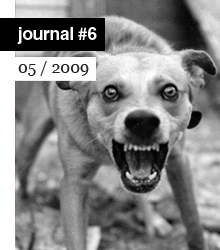 Projections of the future that were made in the past are often striking in their bold naïvete—didn’t people understand then that future projections always end up looking like caricatures of past concerns? But whereas these projections do little to actually activate the future they foresaw, they do function as expressions of pure intention, and in this sense they are probably not so naïve. Rather, they indicate a certain bold willingness on the part of people of a certain time to define in explicit terms exactly how the future should function, and indeed, most of these projected futures never come to pass—they remain possibilities that the present still fails to activate. So in this sense, we may not even be talking about the future at all here, or rather we are interested in the future as a stand-in for the “bold naïvete” of speaking about things as they should be. ..

What Will the Next Revolution Be Like?
Zdenka Badovinac

Concerning Matters to be Left for a Later Date, Part 3 of 4 (Guest-Starring Alexandra Croitoru and Stefan Tiron)
Michael Baers

The Escape Route’s Design: Assessment of the Impact of Current Aesthetics on History and a Comparative Reading Based on an Example Close to the City of Berlin
Mariana Silva and Pedro Neves Marques