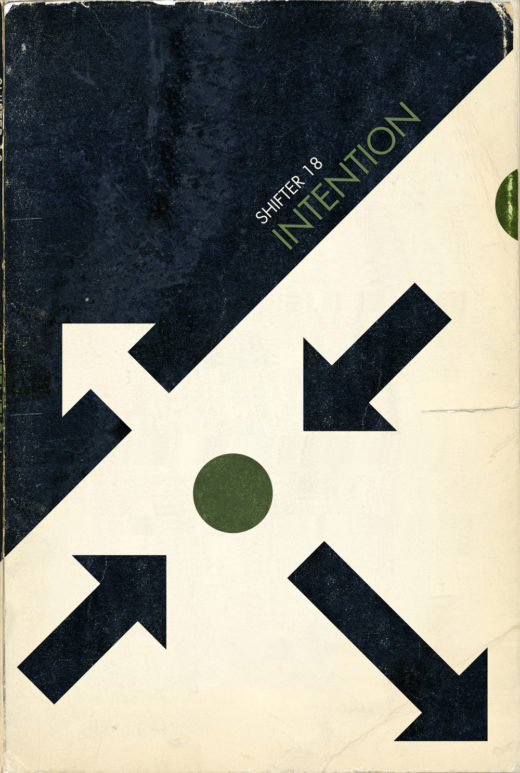 Shifter’s eighteenth issue gathers conversations and interviews between various cultural practitioners that elaborate on the subject of intention.

To intend is to have a conception of the future. To direct and extend attention to a moment that is yet to arrive. To construct a contingent model of the future, while negotiating and adjusting it at any given moment against countless uncertainties, thus providing the greatest possible chance of this future’s arrival. To reflect upon an action and determine its intention is then to trace the arc of this willed movement – looking back, culling through layers of events, interactions, and gestures, all of which make up the texture of the present.

Intention could then be understood as a method of plotting time. With the subjective body at the center constructing contingent futures towards which it moves, archiving (narrativizing) the past into a consistent self.

And so the self that strives to be, the moral and ethical individual in the world, can only be determined through intention. It is a quality fundamental to ascribing any value to ones actions in the world. Pleading insanity is to obfuscate intention, thus producing an impasse in civil liberties and the law. Not being able to understand ones intention means stasis. If ones ‘center’ (ones system that is at the root of all judgment) becomes illegible, then the mechanisms of the social sphere and the faith we place in fellow citizens, as well as the judicial system as a whole collapse into a void.

“Why did I do that?,” “I didn’t mean to do that,” “I shouldn’t do that but I know I will.” As if many narratives run like cross currents each competing to be the truth, and by distancing the others, a fragment always claims singularity. The body is also a porous threshold, almost amorphous and inextricably attached to other bodies absorbing, ingesting, and excreting. Perhaps the contingent self is a node that moves along interstices, selecting paths that are (socially, physically) available. Intention is then a map of decisions that both direct and ascribe value to the movement of this node through an amorphous network.