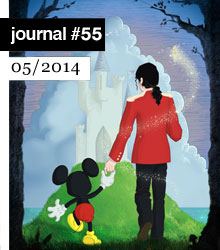 We are increasingly faced with premodern foundation myths coming from right-wing propaganda and grassroots movements alike. They tell us that some things don’t change and they ask us to think about how original communities are constituted. And we start to wonder whether these original communities are new synthetic fabrications concocted by the limits of communication and exchange, by the failed promises of a liberal democracy or a thriving economy that does not reach people who thought they were entitled to it, and who thus start to look elsewhere. Or do these communities actually contain some real claim to a historical line that was violently interrupted by economic and geopolitical shifts that became most pronounced in the 1990s? Have we simply gotten so high on a period of information fever and lateral planetary spread that we simply forgot about entire swaths of the globe that have basically been on another wavelength the entire time?..

Maidan and Beyond, Part I
Oleksiy Radynski

The Octopus in Love
Chus Martinez

Back in the USSR?
Gleb Napreenko

From the Issue of Art to the Issue of Position: The Echoes of Socialist Realism, Part I
Liu Ding and Carol Yinghua Lu

An Artist, a Leader, and a Dean Were on a Boat…
Luis Camnitzer