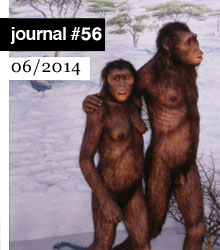 In the summer of 1989, Francis Fukuyama published his infamous essay declaring the global triumph of free-market liberal democracy over communism as the end of ideology as such. Not only that, but he also claimed the world was on the cusp of realizing what Fukuyama’s mentor Alexandre Kojève called the “universal homogenous state,” which would be the climax of a particular Western idealist tradition stretching back to Hegel. It would be the endpoint of a human consciousness based in accumulative historical progress that also grounded the thinking of Marx himself, who pegged his own philosophy to a conception of time and human advancement as a constant moving towards a projected endpoint. But seriously, regardless of whether this endpoint has been reached, how advanced do you really feel? How many artworks have you seen in recent years that even struck you as being relevant as art? And the insane proliferation of regressive ultranationalist and ethnic or sectarian violence hardly points to historical progress either. This phenomenon is spreading nearly everywhere, from the EU parliament elections, to India, Iraq, Hungary, Russia, Japan, and so forth. The list is endless…

The Nationalist Thing Which Thinks: Notes on a Genealogy of Ultranationalism
James T. Hong

Running Along the Disaster: A Conversation with Franco “Bifo” Berardi
LaborinArt

Mutation of the Triad: Totalitarianism, Fascism, and Nationalism in Japan
Sabu Kohso

Maidan and Beyond, Part II: The Cacophony of Donbas
Oleksiy Radynski

The End of the World: From Apocalypse to the End of History and Back
Oxana Timofeeva

Ultranationalism: A Proposal for a Quiet Withdrawal
Lawrence Liang

Is the World Sleeping, Sleepless, or Awake or Dreaming?
Raqs Media Collective

The Rise of a Fallen Feather: The Symbolism of the Turul Bird in Contemporary Hungary
Szabolcs KissPál

From the Issue of Art to the Issue of Position: The Echoes of Socialist Realism, Part II
Liu Ding and Carol Yinghua Lu

A Text That Should Never Have Been Written?
Ekaterina Degot