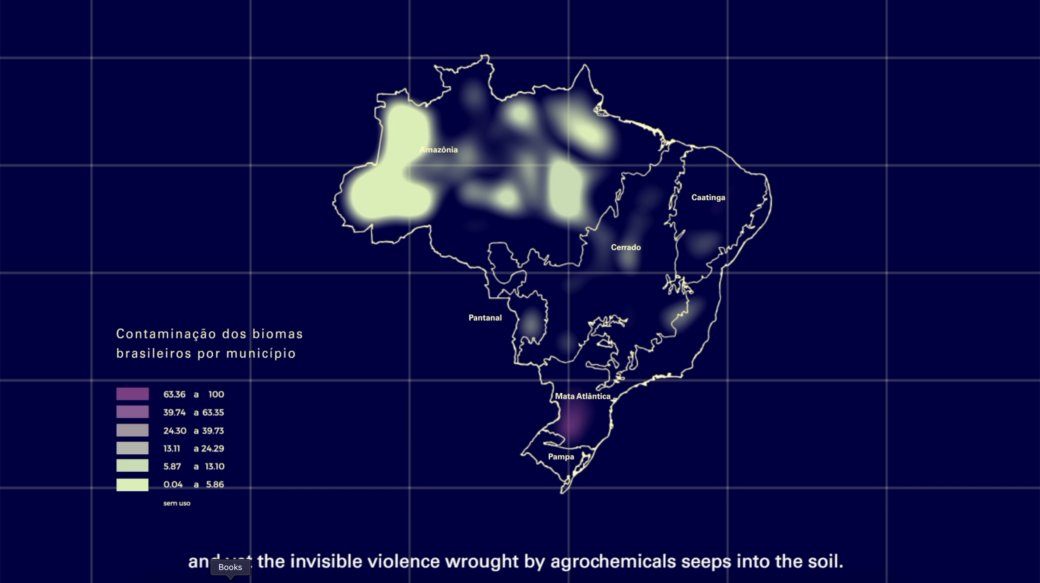 Molecular Colonialism: A Geography of Agrochemicals in Brazil inhabitants: Season 3

Molecular Colonialism: A Geography of Agrochemicals in Brazil

Geografia do Uso de Agrotóxicos no Brasil e Conexões com a União Europeia is a project coordinated by Larissa Mies Bombardi, geographer at the University of São Paulo. This atlas reveals an image of contamination between 2007 and 2014, across different categories: by region, sex, age, ethnicity-race, education, circumstances of poisoning, and if it occurred on or off work. This episode is but a brief visual sample of this tremendous mapping.

In a moment in which Brazil is faced with a takeover of government by fascist powers, which openly promise to escalate violence, inequality, and expropriation, we believe images such as in this atlas are vital for a change in public opinion, nationally and internationally.

More information about the atlas:

The results found in the maps developed by Mies Bombardi reveal a country still divided along the lines of “Casa Grande and Senzala,” the farmer’s house and the slaves’ shack. They also reveal the subjugation of the Brazilian economy to international agribusiness, given that a fifth of all agrochemicals in the world are commercialized in Brazil. With the introduction of GMO seeds, this subjugation has only been aggravated, by creating a closed, rigged circuit, including the seeds, the fertilizers, and finally the “adequate” poison for the seeds.

The atlas also reveals an image of changes to the land by agribusiness. Of all the agrochemicals used in Brazil, about 50% is sold for soy crops, followed by maize and sugar cane. Today, Brazil is the world’s biggest exporter of sugar and biodiesel, as well as the second largest exporter of soy and maize.

Clearly, the problem of agrochemicals isn’t solely a Brazilian issue. The subordination of value extracted from the land to capital reveals its international ramifications. The expansionist logic of multinational companies such as Bayer, Syngenta, Monsanto or Dow exploits the low environmental regulations of “poor” countries, while profits made from patent rights remain in those companies’ countries of origin. On the other hand, several of these agrochemicals are forbidden in the European Union, but are commercialized in Brazil. Paradoxically, Brazilian agricultural commodities, such as fruits and vegetables, are then imported back, contaminated, to Europe. Although not be explored in this month’s episode, this is also an issue addressed by the atlas.