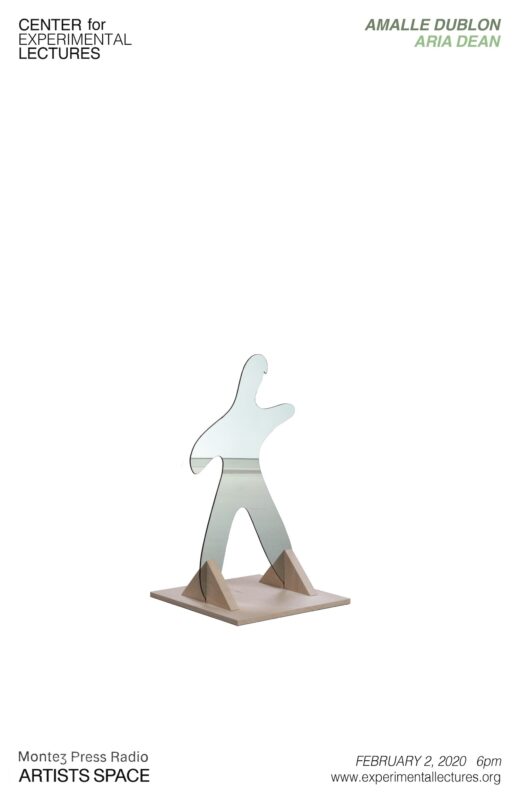 Amalle Dublon and Aria Dean present new work for the Center for Experimental Lectures, an artist’s project based in New York that engages with the public lecture as form. Amalle Dublon will play and discuss Mariah Carey’s song “Honey,” relating it to concerns of dependency, growth and decay, and culinary sound. In Aria Dean’s lecture, To the Ringdown, two become one, bound by a third. As a part of a series of lectures co-commissioned by Montez Press Radio, their lectures will be broadcast live from Artists Space and archived at radio.montezpress.com.

Amalle Dublon received her PhD in Literature from Duke University, where her dissertation brought questions of sound and aurality to bear on queer and feminist thought. She serves on the editorial board of Women and Performance, a journal of feminist theory, and her writing has appeared in GLQ: A Journal of Lesbian and Gay Studies, TDR: The Drama Review, and with Constantina Zavitsanos, in I’m Still Coming: Ellen Cantor’s Coming to Power 1993 & 2016, among other publications. She helped to organize I Wanna Be with You Everywhere, a gathering of disabled artists and writers at Performance Space and the Whitney Museum, in 2019, and, with Constantina Zavitsanos, has participated in Sensing Salons organized by Valentina Desideri and Denise Ferreira da Silva; and in Coop Fund, Amalle Dublon & Constantina Zavitsanos, Devin Kenny, John Neff at Artists Space, New York. She teaches at the New School.