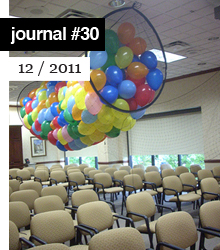 Americans against capitalism? Arab nations toppling autocrats through peaceful protests? 2011 has been a year of massive popular uprisings—on a completely unexpected scale and from populations that were thought to have been thoroughly subdued. Commentators have predicted that discontent in the Arab world would soon come to a head for so many years that it was beginning to seem unlikely, just as others had begun to dismiss the political potency of popular demonstrations in fiscalized Western democracies. For those who started to think that large-scale, radical optimism was naïve or nostalgic, the events of the past year should be sufficient to prove them wrong…

The Future After the End of the Economy
Franco Berardi Bifo

Art as Occupation: Claims for an Autonomy of Life
Hito Steyerl

The Sound of Breaking Glass, Part I: Spontaneity and Consciousness in Revolutionary Theory
Grant Kester

The Resurrected Brother of Mary and Martha: A Human Who Lived then Died!
Jalal Toufic

The Time That Remains, Part II: How to Repeat the Avant-Garde
Sotirios Bahtsetzis