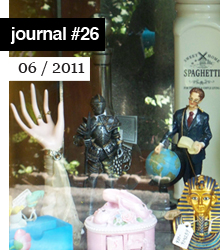 In the February 2009 issue of e-flux journal, Luis Camnitzer suggested in his essay “Art and Literacy” that a core problem in education (particularly for artists) can be traced back to an early stage when one is taught to read and write, in that order.1 On one level, it is simple common sense to suppose that one can only begin to write after learning how to read. But, at the same time, this ordering also takes for granted that consumption must necessarily come before production—only after you consume knowledge will you then be capable of producing it. It is a fundamental understanding of learning that is typical of the master-apprentice model found in craft guilds. The problem arises when the language to be learned has not yet been invented, or the practice of a craft is not controlled by a guild…

Inside the Box: Notes From Within the European Artistic Research Debate
Michael Baers

The Blood of the Victim: Revolution in Syria and the Birth of the Image-Event
Jon Rich