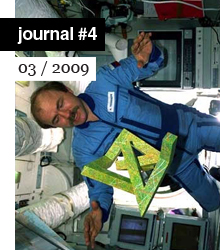 Much of the tension within the sphere of contemporary art is generated by the insularity of the art context, which often prompts artists to be on the lookout for other situations. The museum is too exclusive, the artwork overly framed, the discourse too removed from everyday life. And yet, attempts to liberate artworks from their conditioning often finds them still connected to the art context by a rigid tether. Boris Groys has suggested that in order for art to be shown in public spaces and still maintain its status as art, it must by necessity be more conservative than art shown within institutions, because by forsaking art’s traditional context, it bears the burden of having to justify itself through other means…

Concerning Matters to be Left for a Later Date, Part 1 of 4
Michael Baers

A Museum That is Not
Elena Filipovic

Religion in the Age of Digital Reproduction
Boris Groys

Two in One
Silvia Kolbowski

The Academy is Back: On Education, the Bologna Process, and the Doctorate in the Arts
Dieter Lesage

The Way of the Shovel: On the Archeological Imaginary in Art
Dieter Roelstraete